Paranoid Android: the alienation and extinction of the non-iPhone user

we’re so connected, but are we even friends?

One of the almighty, National Geographic-worthy sights of the human environment is the communal flocking of the iPhone users. There they gather in a social space; alone with everybody, their eyes intently locking onto their convoluted, battery-powered organ that keeps them intertwined with their hyper-real world. Their eyes and voices rarely leave the virtual jungle, leaving everyone but the non-iPhone creature out there naked upon the plains of cold, hard reality. The non-iPhone creature tries to approach and engage in social interaction with the pack, but its attempt is drowned out upon the fast twitching of index fingers swimming through the fibre space of Likes, Loves, Comments and Shares. It is alone. Vulnerable. Disconnected. Non-existent?

This is a hardship and peril every member of the non-iPhone sub-species knows too well. Increasingly isolated from the civil society of its fellow man, the creature turns to basic primal forms of human interaction such as speech and paralinguistic expression. By the time the flock finish feasting on the carcass of the inter-web, everything the non-iPhone user wanted to say, do and ponder has already been said, shared or answered in the virtual jungle of the internet. It remains irrelevant; a species of a bygone era soon to face extinction in a meteor shower of apps, ‘social’ media and incessant index fingers.

Will it survive? What are the threats? Is there any hope for the non-iPhone user sub-species to co-exist with his technological superiors in the future?

A key part of its genetic make-up that it once shared with humans is that the non-iPhone user had a voice – that in being that it could communicate with a pack of its own kind whenever it sort to. But as the human species has evolved, the non-iPhone creature has lost the vocal DNA it once shared with its counterparts as it has now been extradited from the land of speech. 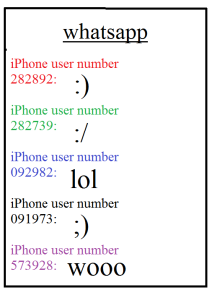 Yes, one of the relics of the bygone species of humans was tribal gatherings of groups to engage in interaction; such interaction may have led to the organisation of events, the discussion of news and the general kinship of a pack of friends. Now the non-iPhone user is excluded from the court of social interaction as the pack exchange utterances in the virtual wilderness of ‘Whatsapp’.

Discussion and debate was once an essential and integral component of the non-iPhone user’s genetic make-up – without it, the creature has lost the voice it once had; a key part of its DNA has been destroyed and extinction becomes the next only logical step for such an inferior creature. In a panic of emotions, the non-iPhone user reminds itself that it is currently standing in a moment in time and this means that it does – in actual fact – exist. Or does it?

What is a key part of the extinction of the non-iPhone sub-species is that they can never actually really be anywhere. 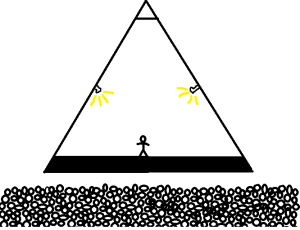 The non-iPhone creature goes to a concert; it watches a performance; it goes on an elephant trek; it watches a primate down a drink; it watches someone pull off a prank in the space of 7 seconds. For the non-iPhone user these moments last a few precious moments of its sub-species life. It enjoys and takes it all in only to turn around and notice the array of flashes and iPhones storming through the surrounding air – encapsulating, collecting and recording every particle of reality to be transferred onto the new virtual realities of Instagram, Vine, Snapchat and Facebook.

The ultimate downfall then for the creature is the realisation that it never actually attended such an event; the non-iPhone creature can’t prove it was there and, in such, its memory and enjoyment becomes invisible compared to a virtual copy that can be disseminated endlessly through the social echelons of the internet. Without the Likes and Shares, the creature has no gratification or happiness from the concert. It was never there really. Its memories cannot be Liked or Shared, and its ticket no longer exists.

It is with this phenomenon then that the non-iPhone user realises that every moment it experiences is no longer real. In a hysteria of worry, the creature looks in the mirror once more to remind itself that it is real. After all, it can see its scaly face and appearance in the reflection. 2 + 2 = 4 and this shows that it has not become extinct… surely? 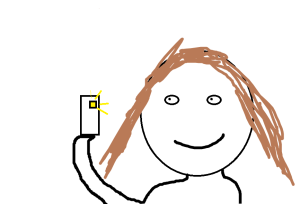 Well, in actual fact, no.

One of the most traumatising genetic differences that the non-iPhone sub-species has from its human counterparts is that it is exposed to the physical world in actual moments in time. It has no camera angle from which other human primates can see it through; it has no filter in which to adjust its appearance in which to attract a mating partner; it has no option of taking twenty selfies and picking the best one. The non-iPhone creature is everything and nothing: a walking victim of the cold, hard light of reality in which iPhone users can snap, upload and expose it to the virtual community of iPhone users, with or without its consent.

Without such an orchestrated appearance, how can the creature attract a mating partner? How can it continue to breed without the hoards of bedroom mirror selfles, gym selfies and tinder selfies? How can it even be seen at all? In the wake of such cataclysmic burdens and overwhelming threats to its future existence, the non-iPhone user looks down at its Nokia 100 in one last desperate attempt to remind itself that it can at least own objects. Surely this then is just a little bit of proof to reassure the non-iPhone sub-species that it has not become extinct?

Again, this is a component of its DNA that has faded out into nothingness. Yes, the final nail in the coffin – the final piss on the grave of the non-iPhone user – is that everything it owns has become defunct.

The non-iPhone creature may have a cat; it may have somehow produced a baby; it may have a tasty looking meal in front of it; it may have a 13,000 word dissertation in its completion – ultimately though, without the technological organ to convert these possessions onto the virtual space of Instagram or Facebook, they remain invisible – they do not exist. How can be real why they have no Likes gratifying their existence? How can they exist if they can’t be Commented on? How then – in this instance – can they be owned?

They no longer exist.

I write you this anatomy of the non-iPhone user not as a person, or even a creature – but as a fading afterthought: a voice beyond the grave. For you see, I have never owned an iPhone – or any smartphone of that matter. Me and my Nokia 100 have wandered out in the wilderness for years, contemplating our existence; it is only now – in a pure pristine moment of grand realisation – I have accepted I don’t exist.

If there is any luck, this post may be viewed by people on iPhones in social spaces across the world and perhaps – if only for a brief second – I myself may become real again as I appear from the air and step physically onto the ground of the iPhone world.

If this is happening now then please remember my name: